Veal parmigiana with pasta and salad

Was fortunate enough to be at the footy today thanks to Jo’s gorgeous cousin, we had great seats out of the sun and the game was entertaining, though we did lose it in the last few minutes we enjoyed the outing, so thanks Son and Rob for thinking of us.

I have not been feeling so well the past few days, though Friday I thought I was better and tucked into a yummy pizza which had oodles of blue cheese all over it, I am thinking it was not the brightest thing to have done now and I suffered a little during the day because of it.

Was unsure about the start time for the game @ 1:10 it was unusual time to start, I think it affected the crowd numbers too as there were lots of empty seats, but later when we were home and I had started preparing dinner by 4:30 I really appreciated that early start. 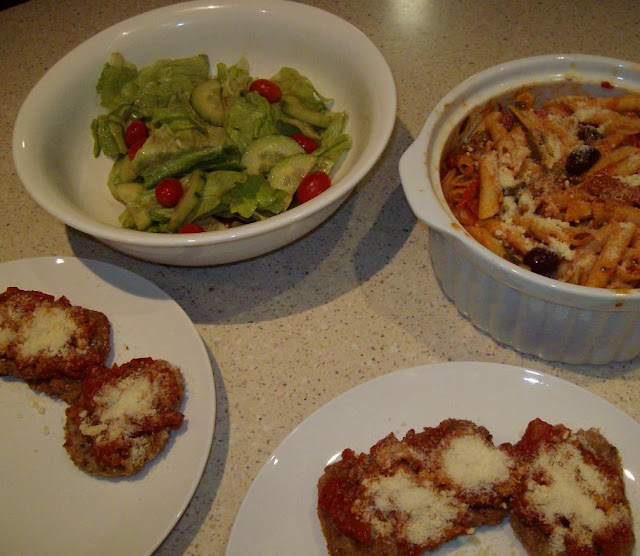 I love eating parmigiana, always have always will, I remember when I was a young fella having a meal at the pub meant having parmigiana, and it did not matter if it were chicken or veal or a tough bit of old shoe leather, so long as it had had the life pounded out of it and was then crumbed and fried, laden with tomato sauce and cheese I was happy. It is funny too, that on many of those nights when I was enjoying parmigiana I was out celebrating another win by the Mighty Royals, so you could almost say it was a traditional meal we enjoyed tonight.

Saying I enjoyed it may be pushing it a little too far though, I ate because I had too, but it was a struggle and I ate a lot less than I would normally when having parmigiana, that may have been a good thing though! Gorgeous enjoyed the meal, which was the most important thing, hopefully my stomach will be a little more accepting of food when I tuck into the leftovers later in the day!

As you can tell this post is appearing the morning after!
Posted by Dinner with Jack at 10:04 AM