I cannot remember the last time I cooked roast chicken, the way my Mum use to do it. It is so easy today to run down to Chooks Fresh and grab a roast chook and put some roasted vegies with it.

I was actually going to do a lazy mans roast by bunging some chicken pieces in the oven, but when Jo went shopping the chicken pieces did not look much chop, so she brought a whole chicken for me to cut up. On seeing the chicken I decided to roast it whole, firstly because it looked great, and secondly, as I had a bucket of Luv a Duck, duck fat that I have been wanting to try out for roasting.

Just as soon as I started preparing the stuffing, Jo’s eyes lit up and a big smile came across her face, Jo loves her roasts!

For the stuffing I diced an onion, added a small fennel bulb also diced, 2 garlic cloves, 2 teaspoons of mixed dry herbs, 2 table spoons of butter and a cup and a half of breadcrumbs. After kneading the butter well into the other ingredients, I then stuffed it all into the chickens cavity as tightly as I could, ending up with a bread crust covering the back door to keep it all in place.

The pan went in the oven at 160c with the duck fat, as I had had it in the fridge and it was solid, it is not a bad idea to heat the fat before adding the vegies anyway. Before adding the chicken to the pan, I massaged some melted butter into the skin, then sprinkled salt evenly all round, then the same with pepper.

My oven is computerised, so all I had to do was push the buttons for the chicken roast program, I put the whole lot into the pan and off it went. The program worked somewhat differently than I had anticipated and the veg looked fantastic after 25 minutes of roasting, so I quickly whip them out, covered with foil and set aside, then basted the chook and closed the door. I am actually writing this as the chicken roasts, and with nine minutes to go it is looking fantastic, just put the veg in to reheat a little and boiled peas and corn, it is all coming together beautifully.
Once the cooking time was up I removed the chicken from the pan and it went back in the oven, which was now turned off, poured the fat into a dish for later use, it gets better every time it is used! I kept about a tablespoon of the pan juices and heated it on the hotplate, then added a couple of tablespoons of plain flour, baked that a few seconds before adding a cup of unsalted chicken stock and a cup of the water I had reserved from the peas, this made a beautiful gravy. 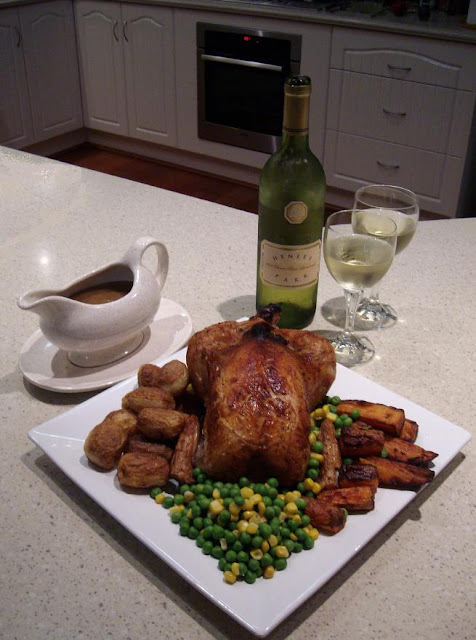 They say that the proof is in the eating, and not a truer word could be spoken of this meal, it was outstanding, I still don’t think I have achieved a chicken roast quite as good as my Mum’s, but when I see Jo eating the bones, I know I have cooked dam near the best chicken roast she has ever had! Jo just don’t do bones like that!

In my humble opinion, fennel is the most amazing ingredient, when used like this, so often when I tell people I have used fennel they turn their nose up, thinking it is going to taste like liquorice or ouzo, this could not be further from the truth. I have used fennel as a roasted vegetable, tonight as stated in the stuffing, finely sliced as a salad, with fish and chicken and it is the most delicate subtle flavouring, the stuffing tonight was close to the nicest I have tried, if not the nicest! 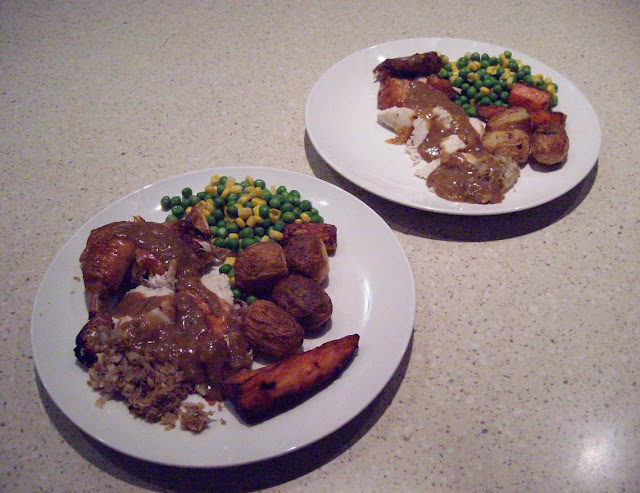 And as for the duck fat, duck fat has become very trendy of late, thanks largely to some smart marketing by Luv a Duck, the brand I used tonight, they have had it on countless cooking shows and have had stalls at shows such as the Good Food and Wine Show, and what did I think after my first use? Well I just can’t wait to use it again, because I know it is going to be so much better, it always is after the first use, and the first use was a winner!
Well, I almost forgot the wine, I matched this meal with the free bottle of Chenin Blanc Chardonnay the chap kindly gave us yesterday in the valley, at the time I could not understand why he would do such a thing, now I do, because I will making a trip back there to get some more, it was that good we both loved it and we rarely drink white wine, take my word for it, Henley Park 2008 Chenin Blanc Chardonay is worth taking a drive to the Swan Valley for, cheers!
Posted by Dinner with Jack at 9:13 PM