We had the family over on Saturday night to celebrate my youngest son’s 16th birthday, it turned out to be a great night and we all enjoyed some amazing food.  Having a vegetarian amongst us dictates that Seafood always features when the family gets together, not that the rest of us are complaining as we all love our seafood. 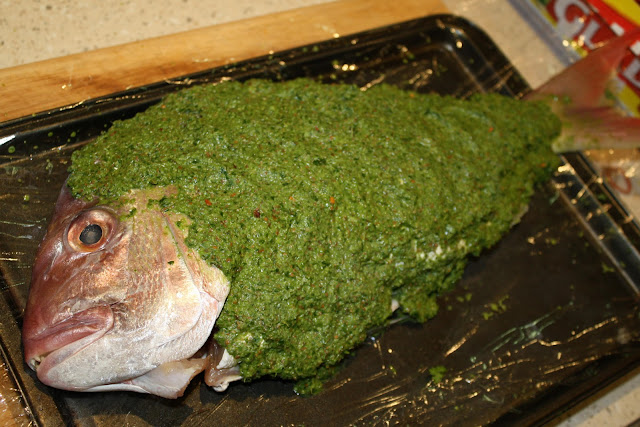 Whole baked snapper which had been marinated overnight in a spicy Thai style, coriander and green chilli paste was the star, with a great supporting role by a Malay dish called Sotong Sambal, which is baby squid stuffed with fish, prawns, garlic and spring onions, the squid is then poached in a spicy coconut, red chilli and onion sauce.  The snapper was delightful, beautifully flavoured and the flesh, which came away so easily from the bone, was moist and succulent.  The squid was tender and oh so tasty, it was a big hit with the boys, the spices complimented the seafood rather than dominating it.

For the meat lovers there was oregano and garlic steak, which was Jo’s favourite, and some Thai style barbeque chicken, which had been marinated in a coconut milk sauce, flavoured by coriander, ginger, lemon grass, garlic and shallots.
Jo made a yummy potato salad and a fantastic layered salad, which was everyone’s favourite, unfortunately as there was no leftovers for my Sunday lunch!

And of course there was Joel’s South African Chocolate Birthday Cake for dessert.  I made the cake on Friday night, and being the first cake I had made in a decade, I had a few little problems getting the cake out of the tin once cooked, leaving a little bit behind in both tins, so the final product looked a little wonky.  The important thing though, was that it was homemade and made with love, but the best bit was the taste, and that was fantastic, it tasted so good my grandson Ethan who is not a big eater, asked for seconds then complained he was so full, but still ate the cake, it was yummy and E was not the only one to go back for seconds, I know that for the truth! 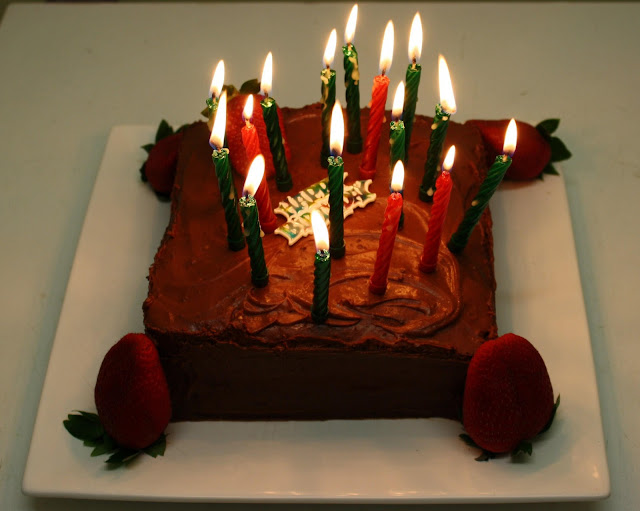 It was a lovely night, just as it should be when four generations sit down to a meal to celebrate something as important as a 16th birthday, so Happy Birthday Joel, hope you enjoyed yourself as much as the rest of us did.