Every now and then I get to feeling a little lazy about my cooking, it is these times when I turn to my old friend Donna Hay as I have tonight.  I have come to know Donna Hay as the easy peasy designer of great food, her recipes are so simple, so tasty, and I love them.  Tonight’s meal was as easy as oiling up a chook and throwing it in the oven for half an hour, then whack in some tomatoes and olives and roast for another ten minutes and dinner is done.  I have added a couple of extras to the dish as I think if you are having roast anything you have to have roast potato, so I part cooked two spuds in the micro, quarter them and put them in with the chook.  I also added a few slices of sour dough bread which were lightly coated with butter and olive oil, I put these in with the tomatoes, they add a great element to the dish with both taste and a bit of crunch.  So we had a few more greens on the plate I served it all up with a few mixed lettuce leafs , which went wonderfully together.
Donna’s recipe
2 cloves garlic
Salt and pepper
Olive oil for brushing
1 x 1.5 Chicken, halved
250g truss tomatoes
½ cup pitted green olives (I used stuffed green olives for a bit more flavour)
1 cup Basil leaves
Red wine vinegar, for drizzling
Preheat oven to 200C.  Combine the garlic, salt, pepper and oil, and brush over the chicken. Place on a baking tray lined with baking paper and roast for 30 minutes. Add the tomatoes and olives to the tray. Roast for a further 10 minutes or until chicken is cooked through and the tomatoes are tender. Top with Basil leaves and drizzle with red wine vinegar to serve. Serves 2 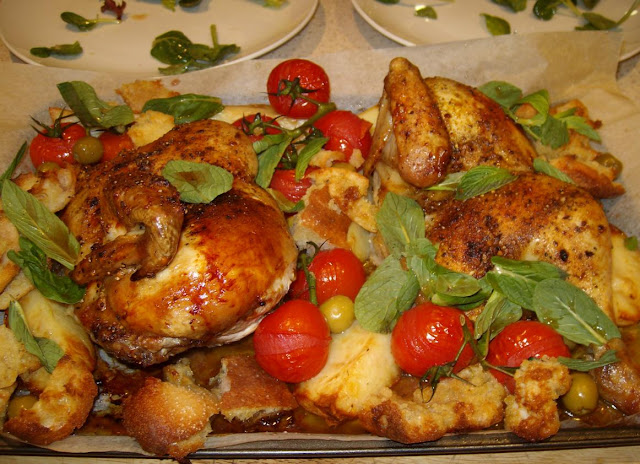 Now I did not have basil leaves so I threw in some fresh mint leaves, and of course the other little extras mentioned above, that was so easy I have been able to write this blog whilst it is in the oven, just the kinda cookin ya want after a hard day at the grind! 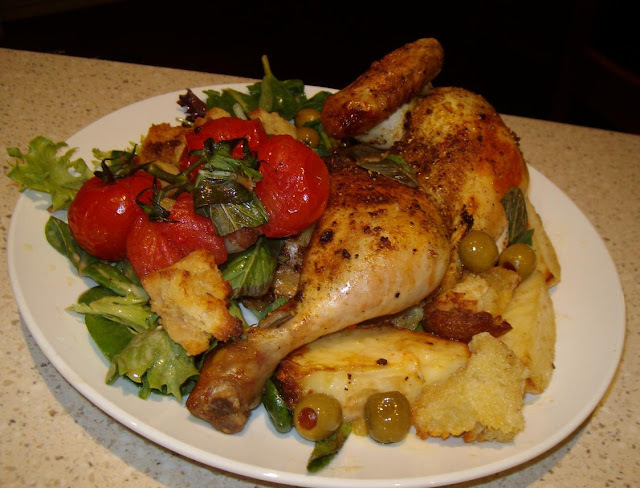 That was so funny, this looked and smelt so good coming out of the oven, Jo was salivating at the lips.  Then I started plating the meal up and before I knew she whips hers away and says "yeah you'res looks better take photo's of that"!!!  The only thing I doubt about Donna's recipe is the bit where she says Serves 2! It is a pretty big meal for two people, and would easily feed four, especially if your having apple pie for desert, something I am not tonight coz there just ain't no room!  One last thing, it is a good idea to serve a couple of slice of bread with the meal to soak up all the beautiful juices, the truss tomatoes were the best!
Posted by Dinner with Jack at 6:49 PM