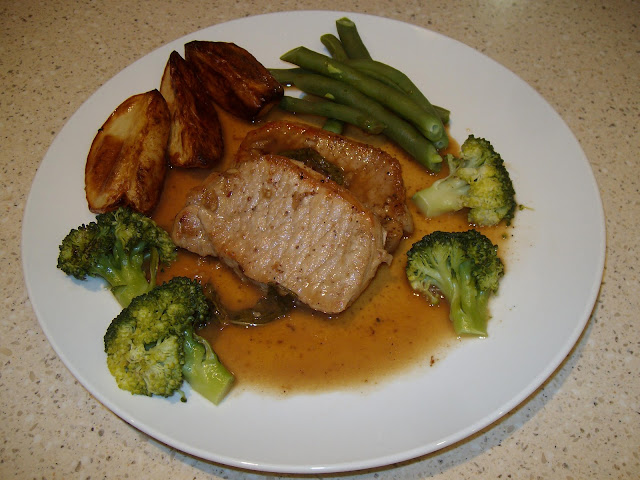 They say the simple things in life are the best, and that is just the way it is with this meal, so simple to prepare and oh so tasty.  The recipe is one featured in my most recent acquisition a cookbook by Donna Hay titled “no time to cook”.  Jo gave the book to me as a gift, just out of the blue and it is a beauty, full of fantastic recipes and how to tips, many of which will be tried and tested in this household before too long.

It’s funny how people react differently with food, some say barely anything at all, whilst others are very vocal both with their comments and their oo’s and ah’s, yet they have enjoyed the same meal.  I am happy to say we have someone staying with us of the later kind at present, and her delight at some of the food she has enjoyed has been shared with all of us, right down to the visual evidence of her enjoyment as she raised her plate to her lips to drink the cider sauce that lay upon it.

Method
Sprinkle pork with salt and pepper.  Heat oil in pan over medium heat, add pork and cook for 2 mins either side.  Remove pork from pan and set aside.  Add the garlic, sage, cider, jelly and vinegar and cook stirring occasionally, until mixture is reduced by half.  Return pork to the pan and cook a further 5 mins or until pork is cooked through.

Donna’s recipe includes 150g green beans which she adds to the sauce in the last five mins, I served the meal with roasted potato, steamed broccoli and green beans.

By the way, my Father in Law was home late so he ate by himself, at the end of his meal I spied him too, lift his plates to his plate to his lips to drink the sauce upon it, yes it really is that good!
Posted by Dinner with Jack at 7:49 AM