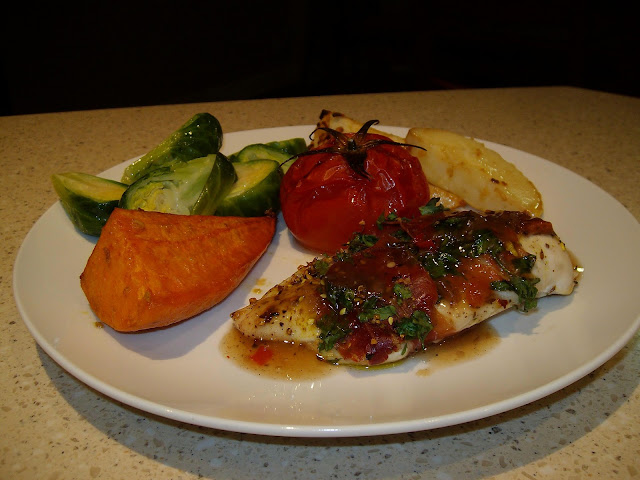 Dinner tonight was inspired by a Donna Hay recipe I found on her WebPages, I say inspired because I did not have the correct ingredients and so improvised a little here and added a little there, the result was a very tasty, easy to prepare meal, just the thing for a Wednesday night when you have a bag to pack and a few odd jobs needing attention. 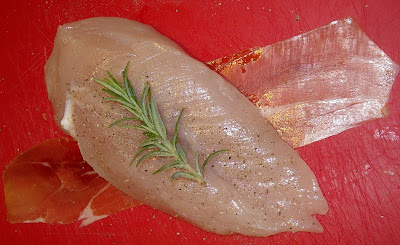 Donna’s very simple recipe called for a few sprigs of thyme, not having any I went with some freshly picked rosemary, which is simply placed on the chicken breast, which is then sprinkled with salt and pepper and finally wrapped in a slice of prosciutto. 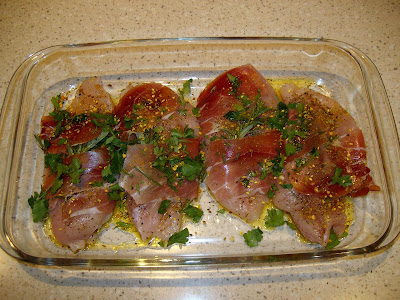 The breasts are then placed in a dish and, doused with a little olive oil, I also sprinkled a little dukka and fresh parsley over the top, the dish then went into an oven preheated to 180C for twenty minutes.   To accompany the chicken I roasted vine ripened tomatoes, potato and sweet potato, which I coated with some olive oil then coated in a little French onion soup mix, this is a great way to have roasted veg and for some green I steamed Brussels sprouts.


For a sauce I brought a quarter cup of dry white wine to the boil to which I added a tablespoon of red currant jelly, then lowered the heat to simmer, reducing the wine by half.  Added a cup of chicken stock and brought it to the boil before reducing to a simmer and adding a heaped teaspoon of eggplant chutney.  After the chutney has cooked for a few minutes, mash with a fork, then thicken sauce with a paste made from cornflour and water.


My father in law watched on as I prepared the meal and was very excited to see we were having that stuff again, because he enjoyed it the last time he had it, he was speaking of the prosciutto and I can’t blame him for getting excited as the flavour is awesome!
Posted by Dinner with Jack at 8:57 PM