After cooking with saffron last night and enjoying its flavour so much in the yummy sauce of the involtini delicati, it got me thinking today of one of the best things I have ever tasted, Bouillabaisse.
My brother gave me the best recipe ever many years ago to make a traditional Bouillabaisse and it is outstanding, though it takes a good 3-4 hours to make it and it is quite expensive to make due to the ingredients, but it is worth every minute and every penny when you sit down to a bowl of it, with nothing more than some big chunks of crunchy crusted bread.
I have only ever cooked it twice, due to the length of time it takes and the fact it is quite expensive and you certainly would not cook it mid week unless you were on holidays.
But all the same I had hankering to cook again tonight with saffron and to have it with seafood, so I thought to myself, self get over to Vic Park and buy some of that beautiful marinara mix and find a recipe to use as a base from Gourmet Traveller.  So that is exactly what I did and boy I am delighted with the result, the flavours that where in this plate of food was unbelievable!
It took me about an hour to prepare, cook and serve up and was so good, I would have to think twice about using the other recipe again, but that is bull because I know I will cook that other recipe again on day! 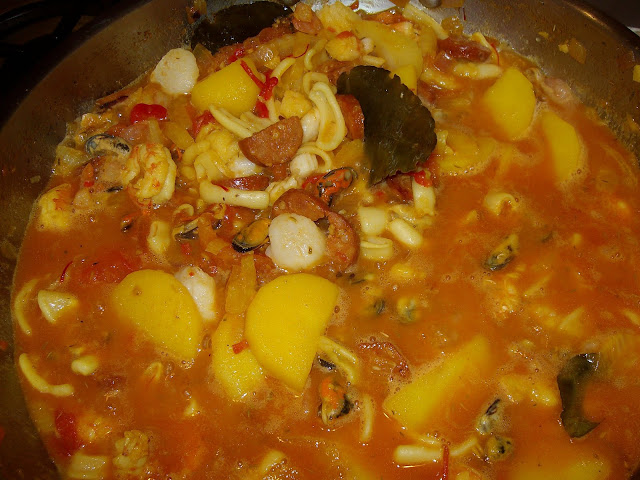 The recipe I used for a base can be found here, but trust me my ingredients were quite different when you get to the lower end of the page.  I did follow the cooking method to a degree, just changed a few things due to the ingredients I used, so the fish went in first, then the squid, then the prawns and finally the mussel meat and scallops which take so little time to cook.  The marinara mix I use comes in a 400g bag, it costs $5.40 and has about, 1 cup diced baby squid, 1 cup mussel meat only, 1 cup shrimp and ½ cup scallops, the place I buy it from is in Burswood Road Vic Park, and they know how to treat seafood, they only sell frozen product but when you defrost it, you can smell the ocean it is so fresh.  They do a bigger 1kg bag at $7.90 and I noticed today they have whole baby octopus in it, looks good but was more than I needed.  I also added 1 cup Norwest prawns and a fillet of fish I had in the freezer and instead of using a bay leaf I added 4 Kaffir lime leaves, which where ideal for this dish.
The other thing I do different to the recipe is with the saffron, rather than adding the threads to the pan, I dilute them in a ¼ cup of boiling water for about ten minutes before I use them, this brings both the colour and the flavours out of the threads.
If you were to follow the GT recipe to the letter I can guarantee you it would be fantastic, you might spend a little more but it would make a great meal  and would suffice until I do my traditional Bouillabaisse and share it on this blog, but you’ll have to wait until sometime midsummer for that!   In the meantime if you did what I have done tonight, I know you are going to enjoy! 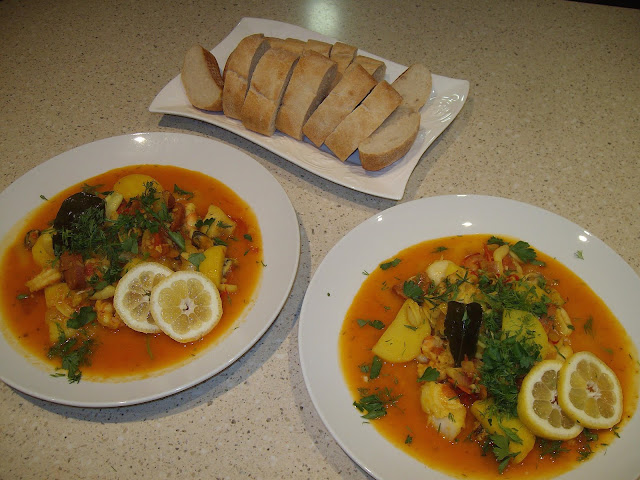 Garnish with fresh herbs, dill, flat leaf parsley and/or fennel fronds, serve with fresh crunchy bread or garlic bread, knock yourself out!
Posted by Dinner with Jack at 8:18 PM

Email ThisBlogThis!Share to TwitterShare to FacebookShare to Pinterest
Labels: Seafood