As it was not such a nice day out, I stayed in at lunchtime today and had a quick look on Gourmet Traveller to see if I could find something which featured pork with apple sauce, I came across this recipe by Neil Perry http://gourmettraveller.com.au/crumbed_pork_cutlet_with_sauted_apples_potatoes_and_sage.htm, it was a different way of using the apples to what I am used to but it looked worth a try. I love crumbed pork, crumbed anything really, and I am so glad I did try it, whilst it looks a reasonably ho hum recipe, bit run of the mill, it was really, really, nice, the potato and apple combination went so well cooked like this. It was funny watching Jo though taking her first taste, she was not aware of apple being in it, and she was really thrown when she expected to tasted potato and it wasn’t. The recipe calls for pork cutlets, and they had some nice ones at the shop, with the medallions right alongside them and at $13 a kilo cheaper, they won! Did miss the bone to chew on though! I don’t think you’d be disappointed either if you tried this out, it really was yummo. 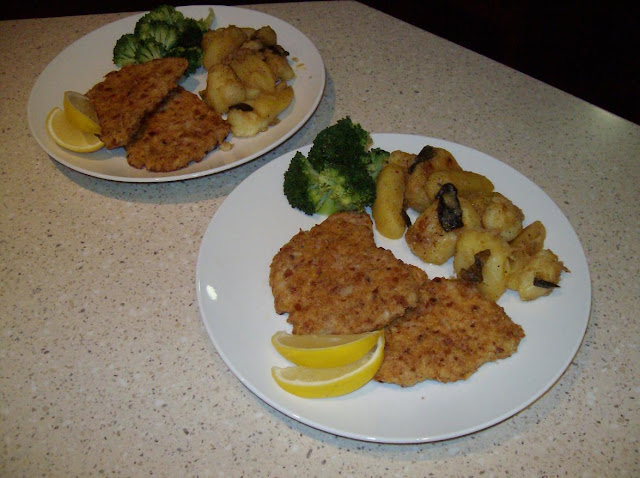 Posted by Dinner with Jack at 8:16 PM