After being hounded for weeks I have relented and cooked Jo a lamb roast, I chose a boned leg of lamb which I rolled with a lemon and oregano stuffing, my mouth started watering for this meal the moment I prepared the stuffing, it smelt so good. I combined a cup of breadcrumbs with a ¼ cup of chopped oregano, finely grated rind of a lemon, 4 finely chopped anchovy filets, 2 crushed garlic cloves and a 1/3 cup of olive, seasoned with salt and pepper. I spread he stuffing out evenly over the meat, leaving the skin side out, being a boned leg there was one lump thicker than the rest, so I made a pocket in that bit which I also stuffed it with the mixture, the meat was then rolled up and tied of with cooking twine.

I browned the lamb for a few minutes all round in my large pan, then transferred to a large roasting dish in which I had earlier placed potatoes which I had halved and tossed in a little oil, just resting the meat on top and then covered the pan with foil and into the oven which was preheated to 180C. Roast the meat like this for 90 minutes, then remove the foil and roast a further 30 minutes, when I removed the foil I added sweet potato and baby carrots to the pan.

Once the meat was cooked I removed it and the veg from the pan, covered the meat with foil and allowed it to rest for 10 minutes, during which time I steamed some broccoli and prepared gravy to serve.

I think everyone loves a good roast, whenever I have one I am taken back to my youth, going off to church on a Sunday morning with my brothers to come home an hour and a half later to find Mum putting the spuds in the roasting dish, then sitting around the table snatching a section of the Sunday Times from whoever happens to have it, reading the comics and trying out some of the puzzles printed for that day, whilst we waited for lunch. Then sneaking out to the kitchen when Mum starts to carve the meat, to sit, watch and wait for any wayward bits that would fall of the cutting board, I remember they did not have to fall too far before they were snap up and devoured! There were always potatoes, pumpkin, cauliflower and either beans or peas on the plate and the yummiest gravy, all beautifully cooked and piping hot. We always called it a lamb roast, but with so many mouths to feed it was usually hogget or mutton on the plate, but it was so tender it would melt in your mouth, thanks to hours of slow roasting in a wood fired oven. There were always sweets to follow too, usually the best apple pie I have ever tasted, the current one always tasting better than the last! Or an upside down self saucing pudding with custard, in summer it would be canned fruit and ice-cream, whatever it was there was always plenty and you left the table feeling like a stuffed pig! To finish the meal off everyone was served a cup of freshly brewed tea, and not a tea bag in sight! Funny I can always remember any visitors that happened to join us for Sunday lunch were surprised at the younger kids drinking tea, I think I was about 5 when I first had a cup to myself, before that it was usually a swig of Mum’s whilst sitting on her lap, those were the days!

At the end of the day, lemon and oregano roast lamb may not be your traditional lamb roast, but it was very very tasty, and I got to enjoy it with my gorgeous wife and youngest son Joel, with a little luck I have created a nice memory for them! 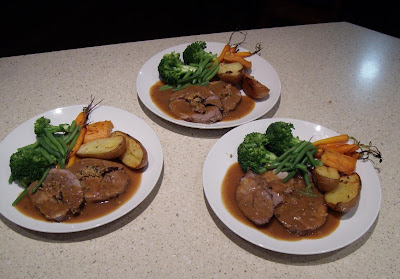 Posted by Dinner with Jack at 6:56 PM

Email ThisBlogThis!Share to TwitterShare to FacebookShare to Pinterest
Labels: Lamb