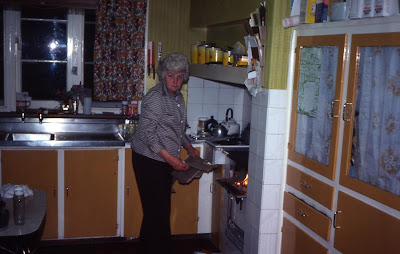 I love this photo, it is a photo of my Mum stoking up the fire of her Metter’s No 2 stove, the stove she cooked on for her family of 12 children. This kitchen was, like so many homes the central core of our home. It is where Mum spent the majority of her time, and I never knew a day when Mum was not up at 5AM to light the fire, which continued to burn well into the night, come rain, hail or shine.

In the middle of winter it was a great place to park your bum to warm it up a bit, you normally had to push someone else aside to take your turn, but come summer it was so hot and there was no such thing as an air conditioner in those days, just leave as many doors and windows open as possible and pray for the Fremantle Doctor to come in!

Ours was a small house, especially given there were fourteen people under its roof when Monica, the baby of the family was brought home. To manage her kitchen in the mornings Mum would be up early, prepare a cooked breakfast for Dad and get him off to work, now when I think about it, I think both Mum and Dad would have cherished the mornings before anyone else was up, as it was the only time I remember that they had to themselves. With Dad off to work, Mum would then wake some of the older kids and get them on their way to work or school whatever the case may have been, and worked her way through till we had all parted for the day, I was usually amongst the last to go, virtually kicked out the door and told to hurry myself up!

Come the weekends I don’t think Mum actually left the kitchen, she was always busy cooking something, breakfast, lunch and dinner or preparing for the Sunday night feast, the one night when everyone sat down with their girlfriends, boyfriends, mates or whom ever happened to pass through to say hello. As the family grew and the older children married and had children of their own, these events got bigger and bigger and bigger, it was total mayhem, but Mum did not falter and the food she prepared was to die for. Every now and then, I will bump into mates I went to school with and so many of them will ask about Mum and then go on to speak of a cake or piece of apple pie or something they enjoyed so much at her table.

I feel it was in this kitchen that I developed my passion for food and for cooking, as a young child I would stay in the kitchen after the dinner dishes were done and help Mum with making lamingtons, dunking chunks of sponge cake into chocolate, putting it aside on a wire tray to let the excess chocolate drip off, then rolling them in coconut. There used to be major fights amongst us all over who was going to get the beaters when a cake was being made, or who had bagsed first the shank off a roast.

The kitchen was also the place where the girls would gather to tell Mum of their day, what had happened and of there plans for latter in the week. I would spend time sitting there listening, never saying much, with all those women I never seemed to get a chance anyway, and there was always a chance offering of a slice of meat as it was being carved, too good to miss out on, so it was a great place to be, I made myself scarce though when it was time to do the dishes, that was girls work and with 8 sisters, they really didn’t need me, did they!

Love you Mum xx
Posted by Dinner with Jack at 9:02 PM