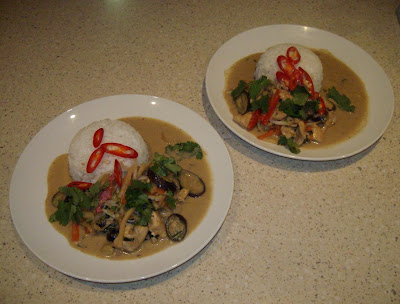 Cooking dinner tonight was like a trip down memory lane for me, and an absolute pleasurable trip at that! Such is the effect that Thai food has on me. I still remember the first time I ever ate Thai, it was at Top End Thai, a very authentic restaurant in Hannan St, Kalgoorlie. The owner/chef Artchariya Ward, is a beautiful woman of around 70 years of age now, and as far as I can tell still preparing meals for her very fortunate clientele. I was amazed and hooked on Thai at my first mouthful, it was like a flavour explosion in my mouth. That night we had a mixed appetiser plate, Green Curry Chicken, Seafood Jungle curry and Coconut rice, I liked it that much I went back the next night, this was back in 1996 and I still remember it like it was this afternoon. On my return to Perth, I started looking for a good Thai restaurant and was amazed to find Artchariya had a sister restaurant in Edward St, East Perth. I introduced many work and social friends to Thai food at that establishment, unfortunately Artchariya had to close it to concentrate on Hannan St when her head chef left for greener pastures. That was a sad day for me, and I cannot remember how many times I have said to Jo how I would like to take her to Kalgoorlie just to visit Top End Thai, it still rates as the best ever on my list.

A couple of years after that work trip to Kalgoorlie, I found myself in a position where I had to cook for myself or go hungry! Green Curry Chicken was amongst the first things I set about to perfect, I never cook to a recipe, so it changes every time I cook it, but tonight’s version is pretty close to the norm now. I actually went to the Dusit Thai restaurant in Northbridge for the only cooking lesson I have ever had, that night I was given a recipe and instructions to cook their dish, starting with grinding herbs and chilli’s into a paste, I have lost that recipe now, but I still follow some of what I learnt from them. One thing that I learnt was the brand of Coconut Cream they use and swear by, and it is the best!

In February 2000 my eldest sister went away somewhere and left my BIL at home to fend for himself, we decided to go out to some dance, and he was to pick me up, so I said come early and I’ll make dinner for you. Well he walked in and saw I had Green Chicken Curry on the stove and his face lit up, ten years later he still talks about that night and in particular that meal, something he does not and will never get at home.

In July 2004, I had my gorgeous girlfriend over for dinner, the first dinner I cooked for her, I had only known her a few days but she was impressed, so much so that I am still cooking for her today!

To say I love Green Chicken Curry would be an understatement, and to hear me utter those words you might think, mm that’s nice, the words really don’t convey the message that well do they, but my memories ah now that’s different and I have shared but a few!
Posted by Dinner with Jack at 8:22 PM