In 1995 travelling through Northern Territory, I came across a little Italian restaurant in what was no more than a back alley of Darwin. There I met this little Old Italian woman, she was 88 years of age, very frail, but still fronting up each day to cook in the family restaurant, after speaking with her I decided to try Cannelloni for the first time in my life, and I can still remember every mouthful such was the flavour. It was so delicious, and fortunately for me the trip I was on saw me visit Darwin on four separate occasions that year, and on four separate occasions I dined on Cannelloni cooked by that little old lady, at that little Italian restaurant, it really was sensational.

The following year I returned to Darwin for what was to be my last time and very eagerly headed for the same restaurant, only to find that lovely old lady had made her last Cannelloni and had departed this world for a better place. I have never been able to find Cannelloni that came close to hers and I have tried a few, so a while back (6 months or so) I brought some Cannelloni tubes with the intention of making my own, the memory of the Italian Lady’s Cannelloni has to date kept me from taking up the challenge, until today when I had a yearning to make Cannelloni.

Whilst the dish I enjoyed so much was made from minced beef, I made mine from a couple of chicken fillets I had left over from last night’s meal and as I do not have a meat grinder, I merely minced the breast meat by dicing as finely as I could. Not having a recipe for chicken cannelloni, I basically followed the techniques describe to make Spinach and Ricotta and winged it from there. Starting out with frying a finely diced onion with a little capsicum, a clove of garlic and half a carrot, which was finely grated, I wasn’t sure about putting carrot in this but it went in all the same. I then added the finely diced chicken breast and cooked for a few minutes till well browned. I then transferred to a bowl and added a handful of roughly chopped basil, a tablespoon of flat leaf parsley, a tablespoon of grated parmesan cheese and seasoned with salt and cracked pepper. The flavours were still not quite right so I added a teaspoon of Italian dried herbs, this gave it a rounded flavour with a bit of punch. I then added a cup of ricotta cheese and mixed well, happy with the flavours I set the bowl aside and started making the tomato sauce. 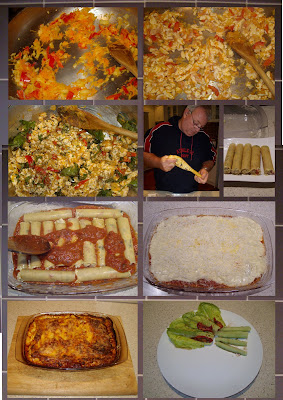 For the sauce, I fried a diced onion gently for a few minutes, then added a finely diced capsicum, 1 crushed clove of garlic and about a cup of finely sliced mushroom, cook this stirring until the capsicum has softened and the mushrooms are well coated in the juices, then add a 440 gram can of crushed tomatoes with 1 cup of chicken stock, bring to the boil and cook a couple of minutes stirring, then cover and continue to cook in oven set to 180C.

With the tomato sauce underway in the oven I turn my attention to piping the meat mixture into the cannelloni tubes, I generally use Barilla pasta (in the blue box) but have used Granoro this time and it was very nice pasta.

With the tubes ready to go, I quickly made a simple béchamel sauce, by adding 1 tablespoon of plain flour to 25 grams of melted butter, I take the pot off the heat to stir in flour, stirring until I have a nice creamy paste, then return to the hotplate and slowly start adding 1 cup of half milk half cream that has been brought to boiling point in the microwave, continue stirring as you slowly add the milk/cream until you have a nice smooth sauce. Now bring back to the boil, but as soon as it does boil turn heat down to simmer for 3 – 4 minutes. During this time transfer the tomato sauce from the pan in the oven to a bowl and quickly puree, then pour enough tomato sauce into a casserole dish to cover the bottom. Arrange the meat filled Cannelloni in the dish in one even layer, then pour over the remainder of the tomato sauce. Take the béchamel sauce of the stove and add ¼ cup of grated parmesan cheese and a knob of butter mix in well and then pour that over the top of the tomato sauce as evenly as possible. As I love my cheese, I grate a tasty cheese finely over the top and then put the casserole in the oven @ 180C for 35- 40 minutes.

Serve up with a small side salad, a glass of red and you are ready to experience one heavenly dinner! 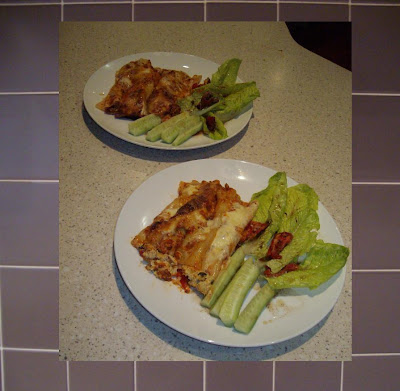 Bon appétit
Posted by Dinner with Jack at 10:10 PM