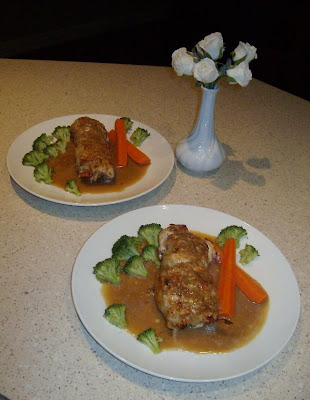 I have had a hankering to cook a certain recipe for a while now but have not been able to find a very important ingredient, Fontina Cheese, I tried all my usual sources but to no avail, then today whilst waiting for my lunch to be prepared, I looked into the cheese fridge and there on top was a beautiful big wheel of Danish Fontina, as red as red could be! The fact it had Danish written all over it threw me a bit, as I was under the impression that it was an Italian cheese, and I have had a few Italians look at my with a funny look on their faces when I have asked for it, now I know why!

I was at Cafe 868 in Vic Park, which by the way is the absolute best Italian Cafe this side of Bourke St, best food, best coffee and lovely people! The lovely lady that served me was taken aback when I asked for 200g of Fontina cheese, she stopped, looked at me and asked would I like that sliced, which was funny because when I said yes please, she turned around and said she would try to slice it but it might stick to the blade! Not sure what that was all about, but then when I told her what I wanted to do and what I had done as an alternative a few weeks back, she turned to me and said in beautiful Italian accent, “Mate there is no comparison!” and with a flip of her fringe she spun around on the ball of her foot and proceeded to slice me 12 slices of Fontina Cheese. And she was spot on! This is where the WOW, really WOW! comes into the story, it is unbelievable the difference in flavour and texture. 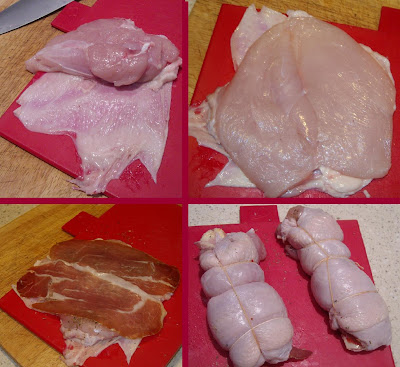 As it turned out I did not have all the ingredients I required for the recipe, and anyway the recipe called for skinless chicken breast and I had decided that I wanted the skin on, just was unsure how to go about doing it, then I called into Torre’s butcher shop on my way home and he had double breasted chicken breast on special and with the skin on, the chap actually offered to divide the breasts and remove the skin if I wanted, I said no, but so glad he asked because it worked out just the way I had hoped for, just as it was.
To achieve the result I wanted I merely cut half the breast off, leaving the skin intact, then filleted the remaining breast which enabled me to butterfly it out, leaving both sides with skin.  I then sprinkled a little salt and dried herbs, placed a couple of slices of prosciutto, then the fontina cheese on top of that, and finished off with some roasted capsicum I had prepared earlier this evening. Then it was just a matter of rolling it all up, tying off with a little twine and into the oven tray I did the capsicum in, and quick coat with oil and into the oven which was preheated to 200C. Let the chicken cook for 10 minutes, then turn and add 1 cup of chicken stock with 1 cup dry white wine, cook for a further 10 minutes. Then the chicken comes out, is covered and set aside to rest, then transfer the cooking juices to a saucepan and cook for 2-3 minutes on a medium to high heat until it is nicely reduced, this is wonderful and smells fantastic, our mouths where watering at the aromas, the wine and stock mixed in with the juices from the chicken and some of the melted cheese, truly unbelievable. Served up with steamed carrot and Broccoli and heaps of that to die for sauce, magnificent!
Posted by Dinner with Jack at 8:29 PM