Well I came home tonight with no real plans for dinner, I had actually pencilled something in on Sunday, but with a busy day at work and running a little later than usual I did not get to speak with Princess, so I went with what we had on hand. I have never made a meat and béchamel sauce lasagne before, that is something I have always left to my gorgeous wife as she makes the best lasagne ever, though she has not made it for me since I broke a golden rule in her book when I made my 3 cheese lasagne.

My argument has always been that it is a different type of lasagne therefore no rules had been broken, well that was until tonight, and hopefully she will now realise she still makes the best ever lasagne and will make one for me soon!

I received a box of wine today, I had ordered on-line as I was given a $50 gift voucher for filling in some survey. To retrieve the offer, I had to order some wine on-line, the box I chose was already on special and with the voucher it was so cheap, so the wine rack is nice and full for a change and at a great price!

In fact the wine rack was so full that there was no room for an Adelaide Hills wine I had not had, nor heard of before, it is a Nova Vita “Mad Russian” Cabernet Merlot, it says on the label it is a hand crafted wine, not sure what that means but it went beautifully with the pasta, in fact there is half a chance the second bottle will be cracked very soon! 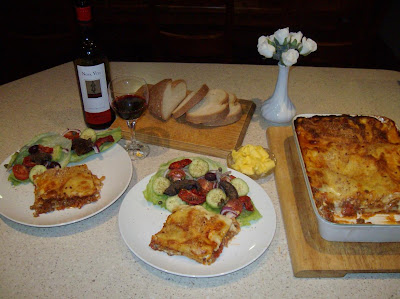 The lasagne was made to my own recipe, ha ha that’s funny because there is no recipe yet!! In case there is some poor soul out there left to defend for himself I will scribble it down and post it to my recipes pages, in the meantime Sláinte Gaelach 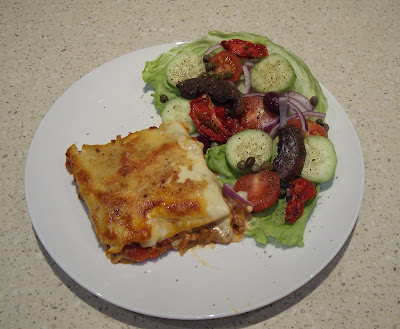 Posted by Dinner with Jack at 8:42 PM

Email ThisBlogThis!Share to TwitterShare to FacebookShare to Pinterest
Labels: Pasta