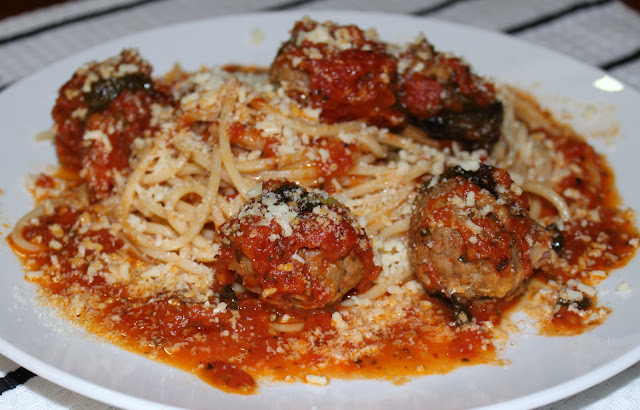 As we were pulling out of our driveway to head down South for the Easter break, Jo noticed something sticking out of the letterbox.  I stop the car to retrieve it and it turned out to be some fine reading for the weekend, it was my May issue of the Gourmet traveller magazine.
This magazine turned out to be very popular among the many nieces I spent that weekend with, it had a very eye catching dish on the cover and better still it was backed up by a sensational sounding recipe for a pasta dish.  In fact one niece asked if she could borrow the mag whilst she copied it down, she was so taken with it, I told her not to bother because all she needed to do was go online and download it.
I am not sure if Mel’s has cooked the dish yet, but the other day when Jo asked I cook pasta for her, I did not have to give it another thought as I knew exactly what I was cooking for dinner!


Spaghetti con polpette, a fancy name for plain a old spag and meatballs you might think, but to tell you the truth this dish was anything but plain, it was totally awesome, packed full of good homely flavours, the kind that have you going back for a little bit more, even though you know you have eaten a little bit more than you should.  It was just as good the next day when reheated for lunch, just should have done a bigger bowl so I could have a go at it the next day too!

When you come across the recipe in the magazine, it looks a bit like one of those advertisement styled recipes, as there is an ad for Italian Passata at the bottom of the page, one of the ingredients in the recipe.  I did not notice this until tonight, when I took a quick look at it to check some spelling, the funny part about that is, I did not use shop brought passata, did not even consider it when I shopped on my way home without the full list of ingredients, because I had decided I would be making my own passata.
To make the salsa al pomodoro, I first baked eight large vine ripened tomatoes in my oven for an hour, I just sliced them in half through the equator, laid them out on baking paper then drizzled some oil and sprinkled thyme, oregano, basil and salt and pepper over the top.  Once they have baked for the hour, take them out remove the skin, mash or puree and they go into a saucepan with  200ml of chicken stock (homemade of course), bring this to a boil then simmer for 45 minutes.  Don’t forget though to follow the recipe with the frying of a little garlic and chilli before adding the baked tomato sauce and add the extra herbs, it will only intensify the flavours.

Ok, yes the shop brought stuff would have been easier, quicker too, but he flavour of doing it this way is second to none, shop brought stuff just ain’t cooked with that much love!   Check out the recipe at Gourmet Traveller, just click back there on Gourmet Traveller!
The meatball element of the dish, were so easy to make and the fact I could buy a veal and pork combined mince pack from Woollies helped too, these meatballs were so good, I think I ave convinced myself to make it this dish again this weekend, I know it will be coming to the camp next year, only this time it won’t be on the cover of a magazine!
Now whilst I am on the subject of cooking favoured dishes again, and in this house at least and again!  I pleased Jo no end last night when I suggested I cook her Beef Eye Fillet in the same manner I had a week before, not much change to it really just varied the veg marginally.  The interesting thing to me was how different two very similar dishes can look, to see what I mean compare this photo below of last night’s effort with what I produced for my last blog!  Jo's efforts to get me thinking about how I am plating up, is at work here, she is if nothing else, very persistent! 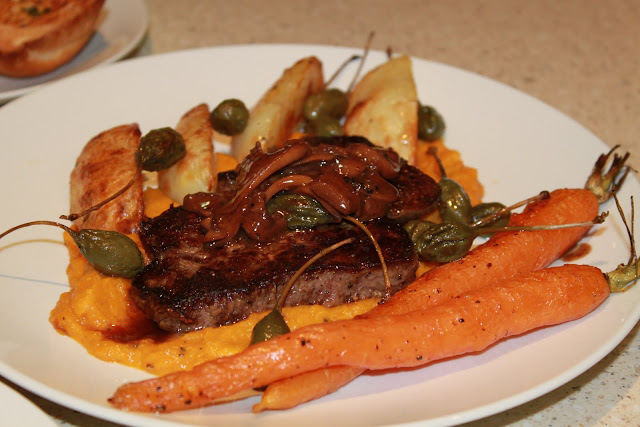 Posted by Dinner with Jack at 9:47 PM