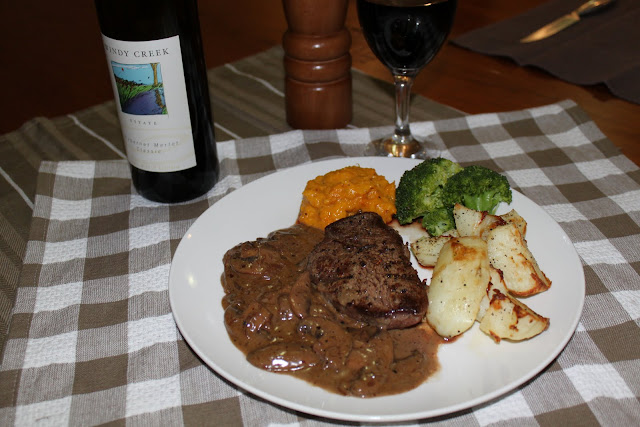 I had no intention of blogging this meal, was having a night off from the computer you might say, but then a couple of the elements of the meal were so more-ish I thought better of it, as I want to do this again, and quite possibly again after that!  And this was indeed a very simple meal, steak and veg really, nothing more than that.
The two elements that made this a wow factor meal for both of us were
The really pleasing thing for me was I put both these together in my head as I drove home, thinking they sounded like they might be ok, I can tell you they were both more than ok, hence the reason I am blogging, not because I am eager to tell you about it, but more so because I want to remember what I did!
I might add here the meat I cooked was also of very good quality, beef eye fillet steak, around 175 grams each, it looked great at the supermarket, it looked great in the pan and it was fantastic on the plate, beautiful meat indeed.
The roasted pumpkin mash, is pretty much self explanatory, I took 300 grams of Kent Pumpkin, peeled it, cut it up into small chunks, doused it in a little olive oil and roasted it at 180C for 30 minutes, whipped it out into a bowl, added 20 grams of unsalted butter and mashed the butter through, waited for it to melt added a little seasoning then whisked for a few seconds.
Jo described this as being like a thick creamy pumpkin soup, it was delicious!
I started the sauce off by slicing six field mushrooms and four golden shallots, which were then pan fried in butter until the mushrooms gave off that beautiful mushroom aroma, seasoned with ground sea salt and pepper, then added a half cup of red wine to de-glaze the pan, I cooked this a few more minutes reducing the wine until almost gone, the mushrooms were then removed to a bowl and set aside, and  the pan wiped clean with a paper towel.
Whilst the mushrooms had been cooking I prepared the steak by seasoning with sea salt and cracked pepper before coating and rubbing in a little olive oil, I like the steak to be at room temperature before going in the pan, it cooks so much better.  Once the pan was ready, I reheated it and added a smidge of butter, once really hot I added the steak and left them there for four minutes, basting the meat with the juices as it cooked, after the four minutes the steak was turned and cooked a further four minutes, then removed from pan to a warm plate to rest whilst I finished the sauce off.
Now the meat was set aside to rest, I added a half cup of homemade chicken stock to deglaze the pan, scraping all the good stuff of the bottom as it bubbled away, I let this reduce a little before adding another cup of stock, which I brought to the boil before returning the mushrooms, after mixing these in well, I allowed the juice to reduce to about half before adding 75 grams Maille Dijonnaise, which I quickly incorporated into the sauce and brought back to a simmer, then just before serving spooned through 2 tablespoons of thickened cream. 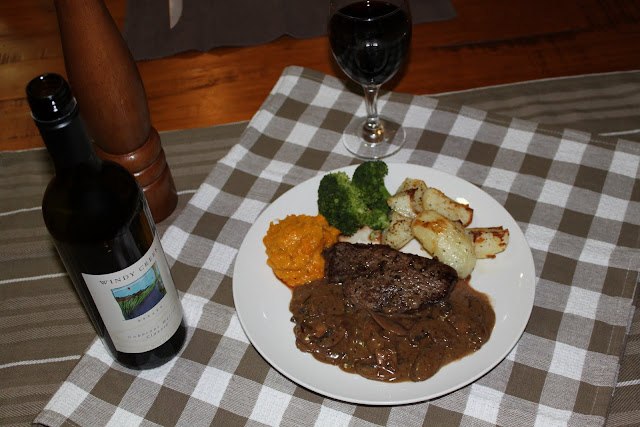 To accompany the meat and pumpkin I micro waved two potatoes for four minutes, which were then peeled and quartered and added to the roasting dish and baked for thirty minutes,  and I steamed some broccoli.
Jo has requested that I always cook both the potato and the pumpkin the way I did tonight, the potato was creamy smooth on the inside and nice and crunchy on the outside, they were pretty good too, actually!
Posted by Dinner with Jack at 9:28 PM