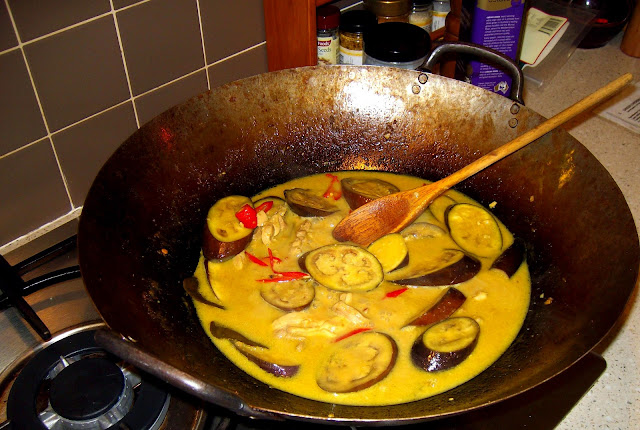 Back in March 2005, Jo and I had meal in celebration of my twin sisters birthdays, at the Dusit Thai restaurant in Northbridge, Perth.  It was a very memorable night for many reasons, for one the food at the restaurant was some of the best Thai I have ever eaten, the restaurant has won several Gold Plates and many other awards.
Then there was the bottle of wine we took along to enjoy with our meal, I gave the bottle to the waiter and he seemed to take an eternity to come back with it, when he did he had mentioned it was very hard to open.
The wine within was divine, one of the best Cab Sav's I have ever enjoyed, it was only after my nephew read the label that we realised the wine to be over 15 years old, and it had aged beautifully, and a bottle gifted to me from Jo's sister for Christmas 2004.
The other memorable thing from that occasion was my being so taken by the Green Curry Chicken, always one of my favourites and this one, if not the best, was definitely amongst the best!  I had mentioned this to our waiter and commented that I would love the recipe, he responded by telling me that I could enrol for a cooking lesson and not only get the recipe but be shown how to cook it perfectly.
So on that last day in March 2005, I enrolled for the one and only cooking lesson I have had in my life, I cannot remember what it cost me, but it was worth ever penny, not only for that recipe, but for the knowledge of what exact ingredients to use and where to buy them in Perth, and the place to buy them is still my favourite Asian store, fantastic store run by fantastic people! I cooked that recipe a number of times in the next few months after my lesson, then we packed up and moved house, three times before settling in our current home, and somewhere along the way with all the packing and unpacking I lost that recipe, devastated as I was, I had faith and believed that one day it would come back to me.  Jo was going through some stuff recently and she come out with the recipe in hand asking "do you still want this or shall I bin it?", I quickly took it from her and put it back in it's rightful place and very happy to have it back, stains and all, ... it has been laminated now and so I should have it forever more!
I brought that recipe out tonight and made that curry for dinner and it was just as I remembered it, fantastic!  Though, I followed the recipe a little too closely, so it was a tad too spicy for me, and so much so for Jo, she could not eat all her dinner, so next time I will leave the red chilli's out all together!

Posted by Dinner with Jack at 9:48 PM