Having a day off on Friday is the best thing, nice bit of a sleep in, then a short drive to my massage appointment, was a nice way to start the day.  On my drive to Wanneroo as I passed Marangaroo Drive, I thought to myself I must venture down that road on my way home to see if I could find the Vietnamese restaurant I keep hearing about.  Funnily enough during my massage, the naturopath actually asked if I knew where that good little Vietnamese restaurant was in Girrawheen, it is uncanny how things like that happen.  Anyway I took the detour on my way home and I found a little bit of Perth that would be equally at home on the outskirts of Ho Chi Min City and that is one part of the world that I would revisit in a heartbeat, so I was pleased to have taken that left turn off Wanneroo Rd.  There are a number of noodle houses in and around the small shopping centre, not knowing the name I was looking for I chose to try the place that had the menu written out in Vietnamese all over the windows the VIET LONG.

I ordered the Goi Cuon (Pork and Prawn fresh spring rolls) and Pho Tai (Raw Beef Hofun Soup), I was surprised when the spring rolls came out as there were three on the plate, I am used to getting two and they were so fresh the first one I ate the noodles were still warm.  The Hoi Sin dipping sauce that comes with it did not excite me when I saw it, it looked so different to anything I have had before, but once I took my first bite I was satisfied and pleasantly surprised all in one, it was delicious.  Typical of the way the Viet’s serve their food, I had no sooner taken that first bite and my soup was placed in front of me, piping hot and oh so fragrant it looked amazing, even though the beef was raw, I hadn’t realised I had ordered the raw meat dish, not that it mattered I have had it before and by the time I had added the fresh mint, bean shoots, chillies and lemon, the meat was perfectly cooked, very tender and the broth was full of flavour, Star Anise and Fish Sauce were prominent on the first taste, but this mellowed as the chilli and mint flavours infused.
I entered the restaurant at 11:35 and there were two gents at the table in the corner, by the time I left well fed and watered at 12:10 there was only one table available, all patrons were of Vietnamese decent and most were dressed as they do in HCMC, little black cap and all! My only disappointment over this lunch was the fact I did not have my camera and as luck would have it my phone was dead, so I could not take photos, so I have had to borrow a couple from the web and it really was not hard to find very similar looking dishes!  Once I arrived home I was able to get in touch with my friends that had told me of the place they go to, I had of course gone to the wrong place, so I will now have go back, like I needed an excuse!
I spent my afternoon paying my Dr My a visit for my biannual check up and after a quick look in a shirt shop afterwards, I was flapping about with nothing to do, so I headed home and decided to knock something up for Jo’s dinner.   I had a couple of ingredients in the fridge waiting for me to have an opportunity to use them and tonight I had the time, so I pulled 6 slices of prosciutto and the block of fontina cheese out and put them on the bench, looking for inspiration as to what to put with them, then on checking the pantry and finding some dried porcini mushrooms, I decided to go with roasted stuffed chicken breast wrapped in the prosciutto.  Once I re-hydrated the mushrooms I added them to a cup of shredded Chinese cabbage, a red capsicum which I charred on the gas burned, a few sprigs of thyme, crushed garlic clove and the cheese which I grated. 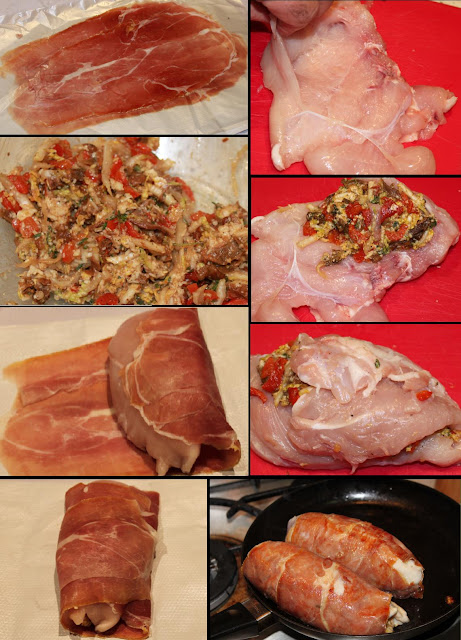 Needing a sauce for the dish I decided to use up some truss tomatoes I had and prepared Neil Perry’s roasted tomato sauce with them, given that it takes 90 minutes to cook this sauce, I got started on it first up, then half way through deciding I was not going to have enough sauce, I added a can of roma tomatoes to them and the left over juices from re hydrating the mushrooms, this made for a very rich sauce, a lot darker in colour and thicker in texture than I expected.  To accompany the meal I roasted carrots and capper berries in maple syrup, and pan fried asparagus and broccolini in some olive oil with a squeeze of lemon juice. 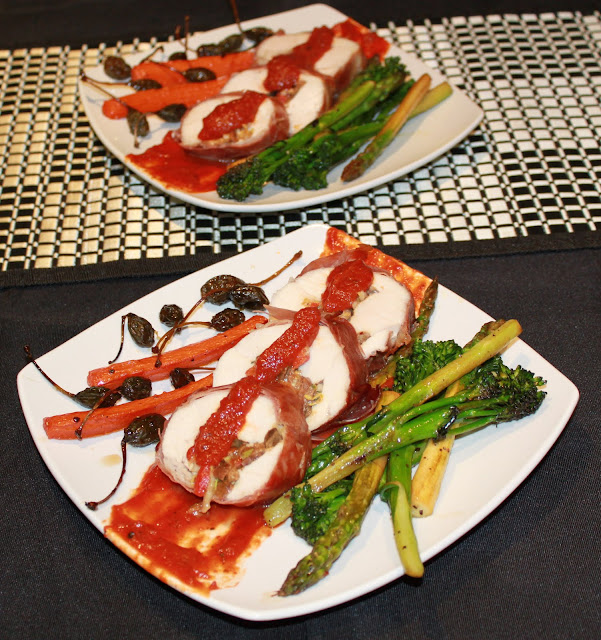