Best thing about Saturday morning is having the time to potter around the garden doing a bit of watering, then coming in to make a scrumptious breakfast that is just what I did this morning, very lay back and relaxing and a great start not only to the day but to a five week break from work!

I, like most people loved Saturday mornings as a kid, at the time there used to be a song played almost religiously by most radio stations it had line that went “It's a Saturday morning confusion, If you think you can sleep, it's an illusion”

That song pretty much summed up my childhood home in East Perth, a very averaged sized house which bulged at the seams on Saturday morning with 12 kids running riot, playing the Stones on the record played, jumping and yelling and dancing and fighting, dogs getting underfoot, Mum yelling from the kitchen that breakfast was ready, trying to get her voice over the record player and now the TV that someone has just turned on, total mayhem, chaos in fact, but oh so much fun.

All the same, that said, I am so thankful for the easy going, peaceful Saturday morning such as the one I have enjoyed today, even the bloody dog over the back fence has been hushed, hopefully for good! 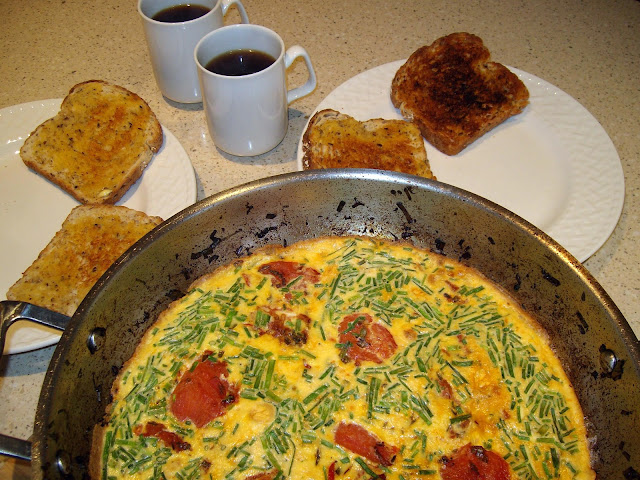 Frittata, for the uninitiated is basically an omelette that has savoury stuff in it which is baked in the oven, it is very easy to make and so very yummy to eat. Obviously the main ingredient is egg, then after that you pretty much throw in whatever you like or have on hand. I threw in whatever I had on hand this morning which include a French shallot, ½ a red capsicum finely sliced, a tablespoon of fresh oregano, all of which I cooked in a little olive oil until soft, I then added six tomatoes which I had cut into quarters and a tablespoon of chives. I cooked the tomato until it started to breakdown and lay a little flat, at this stage I plucked the skins away from each quarter and added a good sprinkling of salt and ground pepper and a little more oil. Whilst the tomatoes were cooking I prepared 6 six eggs whisked in a bowl with a ¼ cup of cream and a ¼ cup fresh chives, after spreading the ingredients in the pan out as evenly as I could I poured the egg mix over the top and cooked that on the stovetop for about a minute, then the pan went in the oven for 7 minutes, just long enough to set the egg and make it golden on top. Served with toast and coffee, it is a great start to any day! 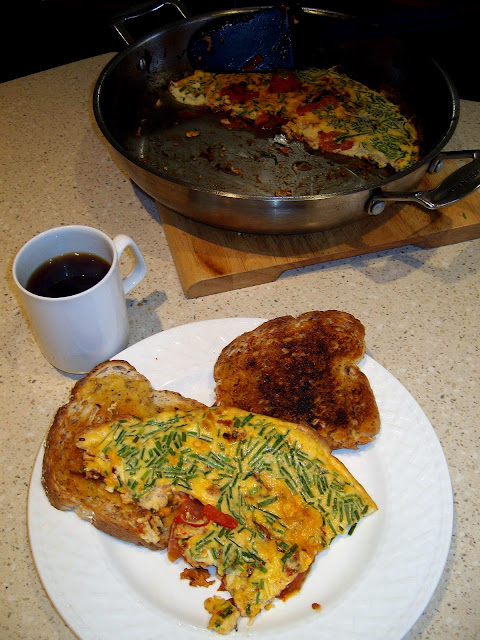 Funny thing that happened at breakfast today, I always cook Jo 2 slices of toast and she always eats one and puts the other on my plate, which I usually don’t want, today I did however and I even went to the point of asking for it, only to be told “no you can’t have it, these tomatoes are so yummy I want the toast for myself!”, they were good!
Posted by Dinner with Jack at 11:10 AM

Email ThisBlogThis!Share to TwitterShare to FacebookShare to Pinterest
Labels: Breakfast