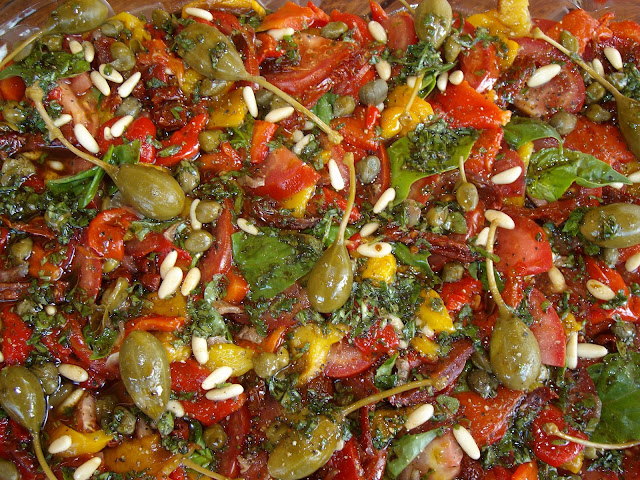 In 2007 Jo and I hosted Christmas Day for the Murphy clan for first and only time, it was also the first time we had invited the entire family to our new home, which had just turned a year old the month before.
Now the Murphy clan is large, well huge in fact, in 2007 we numbered around 96 including Mum, her 12 children, their spouses, children and grand children.  As luck would have it, there were only 30 unable to attend lunch that day, leaving 66 of us to share in what we all hoped would be a lovely and memorable day.
I don’t think I need to explain the amount of work and preparation needed to go into hosting lunch for 66 people, to make matters worse, I let Jo talk me into having her traditional roast lunch, which meant having both the oven inside and the BBQ outside fully cranked churning out roasted meats and vegetables, nothing like a hot lunch on a summers day, right!
As it turned out, this Christmas Day 2007, turned out to be Perth’s second hottest on record at 41 degrees, it felt more like 46 with the heat generated by the oven and the BBQ , it was insanely HOT, we sweltered as the air-conditioning could not keep up inside and with so many people, we had tables set up outside on the patio for lunch, the heat all but ruined the day, it was dreadful.
Being as hot as it was, as well as the roasted vegetables, we had salads mostly brought along by my sisters and sisters in law, but there was one that I recall making myself that was so popular I have been requested to make it each Christmas since, as well as for other family gatherings we have enjoyed.  And really it is not meant to be a salad at all, but an antipasto dish which is meant to be eaten with crusty bread and sliced ham or salami, but I make it as a salad to complement both roasted and BBQ’d meats, as well as hams and salami’s, it is my roasted capsicum and tomato antipasto salad and it truly is to die for!
There are so many layers of flavour in this salad, the way it is put together ensures a good combination of flavours, so when you are spooning some onto your plate, take that second spoonful you were thinking to take, just to ensure you get to experience all of them.  The following makes a large salad so if there are only a few of you half the quantities, but then again there is nothing like tasty leftovers is there?
For salad
4 large red capsicums
2 large yellow capsicums
4 vine ripened tomatoes, the riper the better
6 semi dried tomatoes, patted dry of oil and thinly sliced
1 tbsp pine nuts
2 tbsp capers
4 anchovy fillets, finely chopped
1 garlic clove very finely sliced
A bunch of basil, try and get young leaves
For dressing
1 tbsp balsamic vinegar
5 tbsp quality extra virgin olive oil
1tsp lemon juice
Some chopped fresh herbs
Salt and pepper
To make, start by roasting capsicum in an oven set to 200C for 40 minutes, I make it with 4 large red and two yellow, you can use green to, but the flavour is a little on the bitter side.  Once the capsicum is roasted place them in a plastic shopping bag, tie the handles off and set aside until they have cooled off, once cool remove the skins and break the flesh into ¼’s removing the seeds as you go.
Whilst capsicums are roasting prepare all other ingredients, the herbs I use for the dressing include 1-2 teaspoons each of fresh oregano, basil, mint, chives, sage all of which are finely chopped, it is best to put the dressing on an hour or two before serving, this allows he flavours to intensify throughout  the dish.
Now everything is ready it is just a matter of putting it all together, in the past I have just combined it all in a bowl, mixed and then spread out on the serving plate, but I find it is better for both presentation and flavour development to layer the ingredients starting with a row of tomato, then red capsicum a little bit of this and a little of that, then a row of tomato, followed by yellow capsicum and so on.  If you make the salad early, leave adding the dressing until a couple of hours before serving. 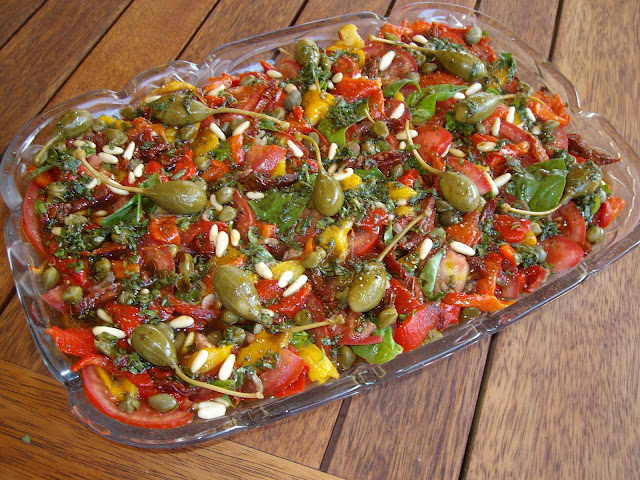 Be warned, once you make this for family and friends, they are going to want it again and again!


The Murphy Clan since 2009, celebrate Christmas as a family the week before Christmas Day, gathering at one of the siblings houses, this year we are celebrating at my sister Cecilia’s and her husband Tony’s home, this evening in fact, we are expecting a small gathering of 73, yes I am taking my roasted capsicum and tomato salad, just hope I get some before it all goes!
Merry Christmas
Posted by Dinner with Jack at 2:30 PM