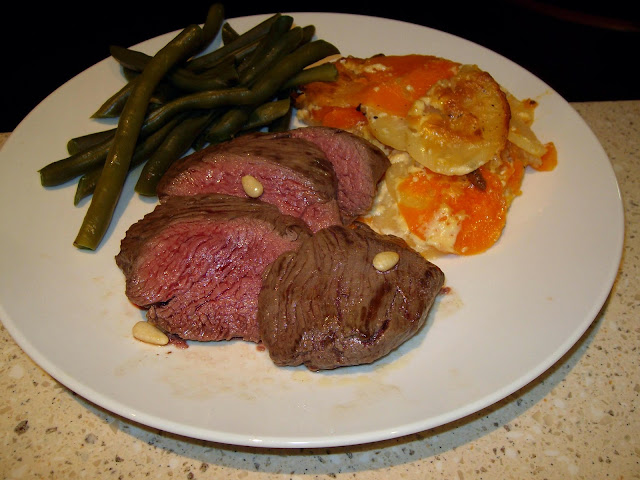 Something different tonight, thanks to my father in law coming home with packs of venison for dinner and it was very nice too, very easy to cook also, which is always a bonus!
To compliment the venison I prepared a potato bake consisting of both nadine and sweet potatoes, these were baked in a creamy sauce infused with thyme, rosemary, garlic and roasted pine nuts, and I also served the meal with green beans.
The meat was taken from the rump of the deer, and it was very lean and dark red in colour.  Before cooking I patted the meat dry with paper towel to remove any excess liquids. 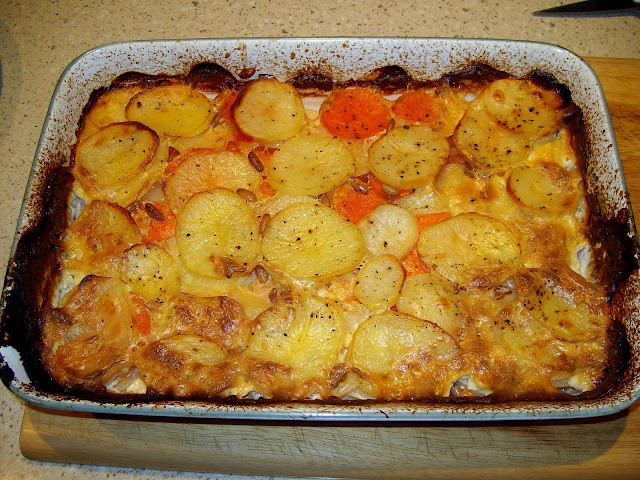 The creamy sauce for potato bake takes about an hour to prepare, and then a couple of hours to bake the completed dish, though you can do this earlier, and then reheat as when you need it.  To make the sauce combine 2 cups of milk, a cup of cream, 6 garlic cloves (bruise them first), a sprig of rosemary and a couple of sprigs of thyme and a quarter cup of freshly roasted pine nuts in a saucepan. Cook over low heat for twenty minutes, and then set aside for 30 minutes to allow flavours to infuse.  The creamy sauce smells fantastic at this point, it had my mouth watering!  Whilst the flavours infuse, slice the potatoes thinly, use a mandolin if you have one, I don’t so I just sliced as evenly as I could.  I almost forgot, you must remove the solids from the sauce before using in the baking dish.
Prepare the baking dish by greasing it with butter, then layer with potatoes alternating with the nadines and sweet potato, adding a little of the cream sauce to each layer and seasoning as you go with salt and pepper. I used 4 large nadine potatoes and 1 large sweet potato, which gave my about three layers of each.  Cover the dish with foil and bake for 90 minutes in an oven preheated to 180C, then remove the foil and bake a further 30 minutes.


Once you have removed the foil from the potato dish, it is time to boil the water for your beans and heat you ovenproof pan with a tablespoon of olive oil and 50g of butter.  Once the butter begins to foam in the pan, add the meat cooking it 2 minutes each side, and only turn it once.  When the second side has been cooked place the pan into the oven and roast for 5 minutes, then remove from the oven, cover and rest for ten minutes.  Whilst the meat rests add the beans to the boiling water and remove the potato bake from the oven, allow to cool for a couple of minutes before plating up.
Slice the meat on the diagonal and place on a warm plate with the potato bake and beans, spoon a little of the buttery sauce over the top and sprinkle with a few pine nuts.
Bon appetite!
Posted by Dinner with Jack at 8:22 PM

Email ThisBlogThis!Share to TwitterShare to FacebookShare to Pinterest
Labels: Game